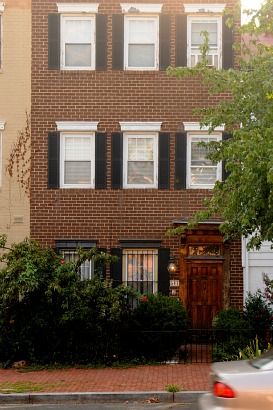 Gary Hart (b. November 28, 1936) was a democratic U.S. Senator from Colorado who made unsuccessful bids for the presidency in 1984 and 1988. Before the second go-round, rumors began surfacing that he was having an extramarital affair with model Donna Rice. At first he denied it, and challenged the media to follow him. After a photograph surfaced of him and Rice on a yacht called The Monkey Business, Hart's campaign collapsed. This townhouse near Capitol Hill, located at 517 6th Street SE, was the site of the alleged Hart-Rice affair.